On the 10th of October, 12 Umbracians got together for the first Community Roundtable Discussion. On the agenda was just one topic: “How to sustain the continuous development of the Umbraco Project and the Umbraco community?” In this post you’ll find the notes from this discussion:

Below you’ll find a gathering of notes made by three of the participants; Carole Logan, Laura Weatherhead and me, Kim Sneum Madsen. This will give you an insight into what was discussed and the thoughts around each topic as well as what the next steps will be.

As you’ll discover when reading, there will be duplicate points mentioned throughout this post. This is because we were three persons making notes and below is the result of us “just” merging our notes: 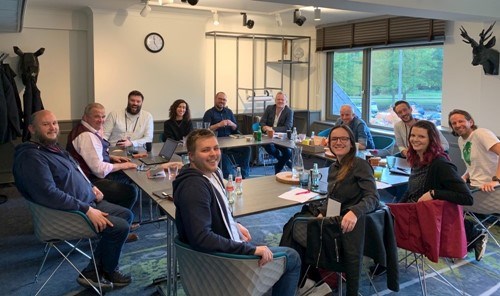 How to sustain the continuous development of the Umbraco Project and the Umbraco Community?

The meeting kicked off with optimism. Each member shared their personal hopes; for the outcome of the three hours together, their aspirations for the community as a whole, and their own connections and experiences within it. The uniqueness of the Umbraco community was recognised by all, with an expressive commitment to trying to preserve the special spirit that pervaded community interactions and events and laid the foundation for the success of Umbraco CMS product.

It was felt that by getting a better understanding of the organic nature of the community, both past and present, it might be possible to map a path of a community member’s “journey” - from passive to active; contributing to leading - and use that journey to encourage new and existing developers to join in.

The importance of fresh views and opinions to the community has been embraced in recent years with strides made in diversity and inclusion. However, as the product and company have matured there must be an increased emphasis placed on continuing to attract community members with diverse experiences and backgrounds.

It may not be possible at the present time to appeal with “shiny” new technology through the technical reach of the core product (given that the technologies involved here are unarguably mature) but there needs to be continued innovation - either through packages, product expansion or publicised “side projects” - to enthuse and motivate new members.

Despite improved and increasingly detailed documentation, there is still a high bar to getting started with getting Umbraco set-up. It is not as easy to piece something together on your lunch hour or get hooked into the “staircase” of iterative learning and contribution, as it once might have been.

The subject of evangelising Umbraco from one’s own platform (independent of Umbraco HQ) was explored from a number of angles, including the shifting tides of the community and the growth of the Umbraco product from open source roots through to commercialisation. There was some consensus that evangelical figures within the community had diminished compared to previous years, and some thought was put into why this might be or how it might be reversed.

One proposal was that evangelism is built upon intrinsic motivation - the pure desire to play and improve both one’s own experience as well as that of the product. Intrinsic motivation creates the drive to do something for “the greater good” without necessary recompense or return.

Another proposal was that evangelism blooms from a sense of responsibility. Of meaningful contribution and engaging with the product on an accountable level, so that the success or failure of features or functionality become linked with one’s own goals.

A final proposal was that evangelism comes from novelty; from curiosity. From being able to try something new within a familiar setting or use Umbraco to prop up new ideas or grow new projects.

In all cases - it was the creating of something valuable and meaningful that meant it became natural to want others to recognise and share in that creation, thus leading to greater engagement and the desire to evangelise the product. Being able to imbue the community with these feelings again could lead to a more defined sense of a shared “mission”.

Thoughts on Structure and Growth

As the Umbraco community and product have matured, increased in size and undergone widespread commercial uptake, it has been necessary to implement new processes and structure in order to accommodate the new scale of the project. This structure has eased some of the early “chaos” and the introduction of Pull request and Documentation teams has made it easier to contribute to the project and distribute the knowledge of how to do so through a wider audience than ever before.

However, what the product and community have gained in structure, they have lost in spontaneity, and this has reduced the ability of individuals to contribute larger or unrequested features/fixes. This dynamism once played a key role in allowing community members to feel part of the project as they were able to shoulder the burden of work that is now largely kept within Umbraco HQ.

As the community has grown, it is now too large to be able to support the “who you know” approach that has sustained it previously. Where there used to exist HQ members who acted as “lighthouses” for technical direction and questions, there must now be a distributed network of knowledge that is accessible to a wider horizon of community - especially those who are new or looking to make contributions. This complicates the issue of how to reduce the entry barriers and how to make meaningful headway on important issues -  a single point of contact within HQ creates a bottleneck for productivity, but likewise, HQ buy-in and direction is often needed for anything valuable to happen.

There was some discourse around what it means to “contribute” to Umbraco. For a long time, this has meant contributing code to the core product in the form of Pull Requests, but there was some discussion around alternative or additional ways that individuals can get involved - be this within the community itself, documentation or feedback.

The advent of the new RFC process has allowed the community to feedback and contribute to new major (and minor) developments within the core product. These changes and feedback contributions range from offering expert advice on moving to .NET Core to more incremental changes such as new ways of tackling various property types and implementations. There was some discussion to how this process can be non-inclusive given that it is played out within the confines of GitHub (must have a GitHub account) and requires contributors to be able to express their views clearly in English as well as being able to weather often turbulent feedback from others.

Although the RFC process is still in its infancy within the project (given that it was only introduced in mid-2019) it would be beneficial to appraise the process for success and adapt it to the often-unique workings of the Umbraco community. It was also discussed about the opportunity for community input into Release Candidate testing (as with the latest 8.2) and whether there would be potential for input into the features and functionality that are included in the planned product releases earlier in the cycle.

Thoughts on Purpose and Balance

Finally, there was some discussion around the purpose of the Umbraco project and how it was viewed within the group. Although the product was originally designed to make an editor’s life easier, it is also the tool of choice for many developers and as such, they are personally and professionally invested in improving it for both their own purposes and for their clients. It was believed that this balance of being designed for editors but being adopted by developers was an important point of balance for the product and tipping it too far one way or the other would be sure to lose community traction.

The fact that Umbraco strikes a balance allows it to be melded into the appropriate tool for the job because different use-cases in business or pleasure require a flexible tool. Even within the development sphere, there are striking differences between a developer who wishes to experiment and play with a product versus a developer who is implementing a strict business case.

Concentric circles: a model for describing interaction in the community

A consensus was established that this can be used to describe how to work together. Imagine a number of areas/sectors each with its own team. The inner circle is the Steward (it could be one or more persons, it can be community and/or HQ). The closer to the inner circle the more involved one is in setting the scene, contributing, influencing etc. 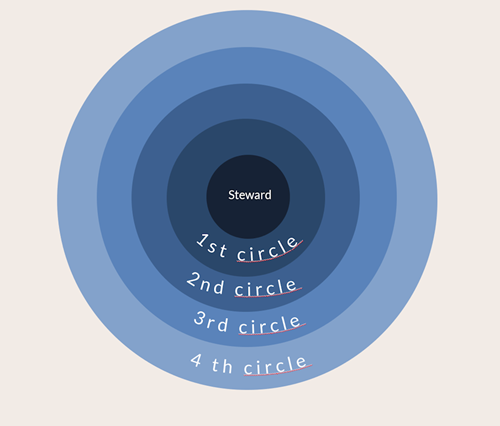 A set of concentric circles for a number of teams. Currently, we have three such teams consisting of both HQ and community members:

How many circles each team has depends upon the area. But it seems that this model gives us terminologies and ways of describing how one can contribute. Names and terms are yet still to be determined.

Some closing remarks from the attendees

As per the summaries above, the input at the discussion in Utrecht and as seen from HQ perspective; this is a beginning. A beginning of doing things differently, but with all the intentions and passion that took us so far, being intact.

The Roundtable discussion provided a window through which to usher a new and improved flow of information between the Community and the HQ. Moving forward together is important and as such, we:

The above is not a comprehensive list, but serve as examples. As mentioned, we want a dialogue so feel free to come forth with any ideas, thoughts and/or comments to Kim; sneum@umbraco.com or Ilham; Ilham@umbraco.com

We are introducing - and testing - a new format for discussing how best to ensure sustainable development of Umbraco and the community.