Tacokats, Game4u, Crazy Bananas. Heard of these companies? Probably not (yet), as they’re made up company names thought of by 17 future coders. Well, possible future coders. Right now they are all between the age of 12 and 13 and have all for the very first time been given a hands-on insight into the mysterious world of coding. A world they all mastered quite impressively by creating 6 different, very creative games - in just one week! And then they came by Umbraco HQ to let us try them and told us all about their experience. It’s such a good story that we just have to share it with you as well:

Entering your regular classroom, but now everything looks completely different - tables have been moved around and there are computers everywhere. It looks more like what you would imagine a grown-up office to look like. You feel both curious and excited because you know a very different week lies ahead - no math, no history, no English - no regular lessons.

This week, it’s all about coding. 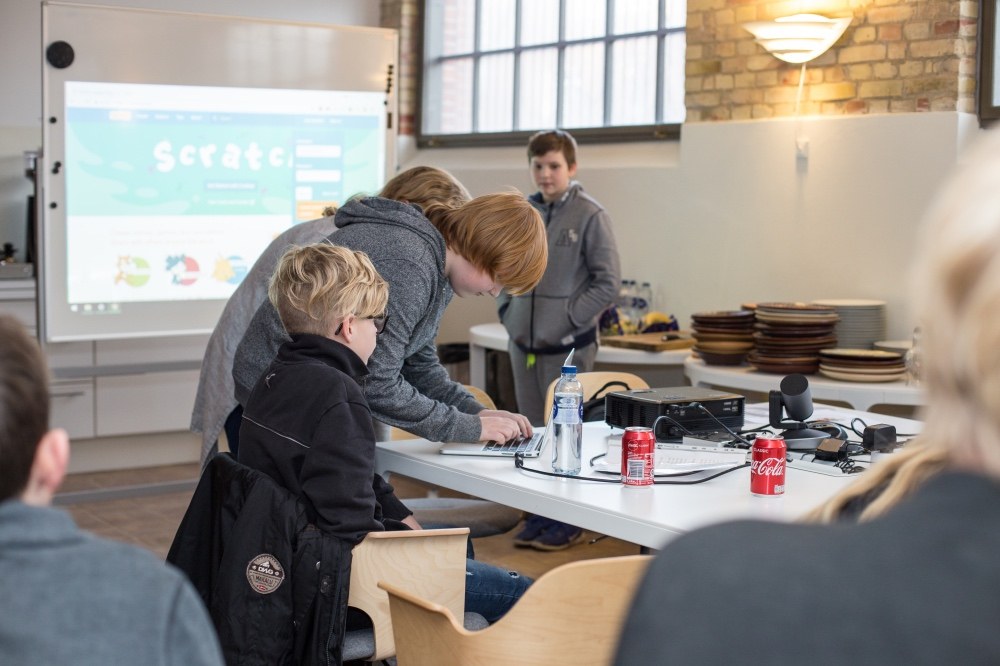 And remember you’re 12 - you know nothing about coding.

Perhaps you’ve heard a little about it but it’s still a big mystery and you probably think it sounds a bit intimidating and complex. And perhaps maybe not so fun. But then you get told that by the end of the week you’d have made your own computer game - from scratch, using code. Now that’s pretty cool.

But that’s not all.

The final games will not just be presented for the remainder of your class  - you are going to present it to “real” coders. People who use code everyday as their grown-up job. They are going to give you an insight into how they use code as a business and then they are going to play your game and give you feedback! 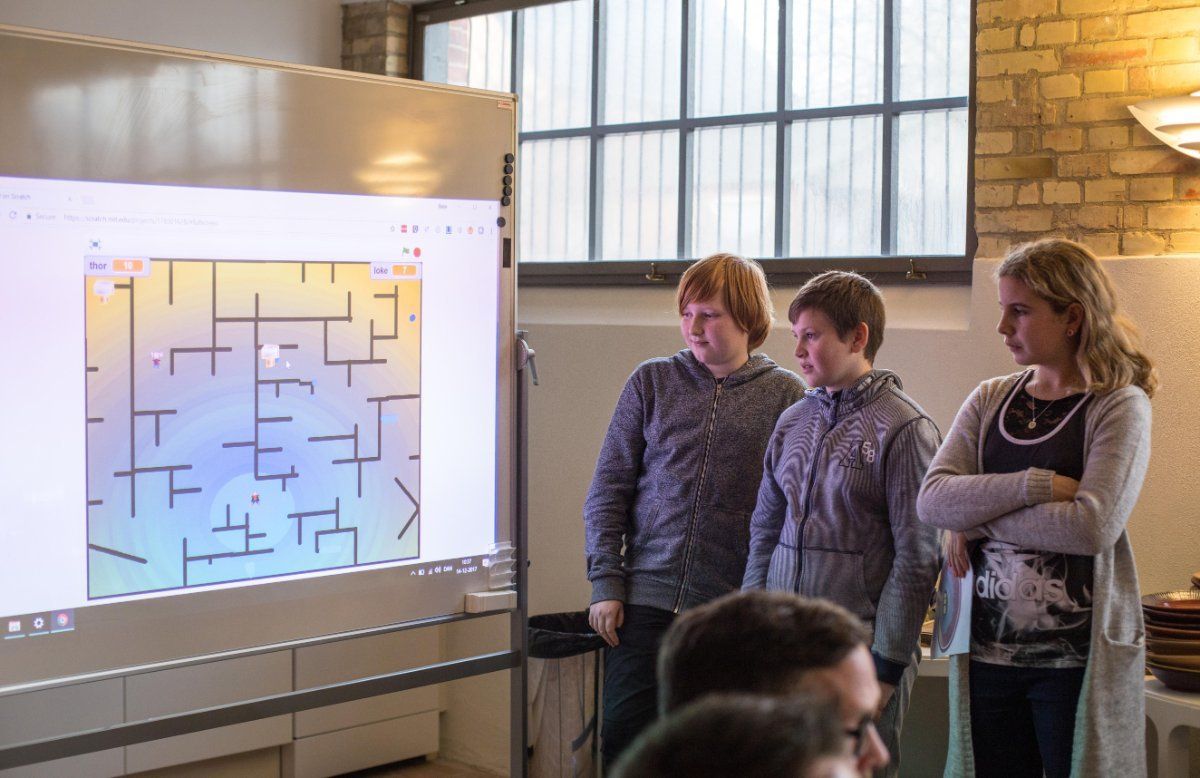 Now the excitement level for this week has really shot through the roof, right?

For 17 school children from Søhusskolen in Odense, this was all reality. 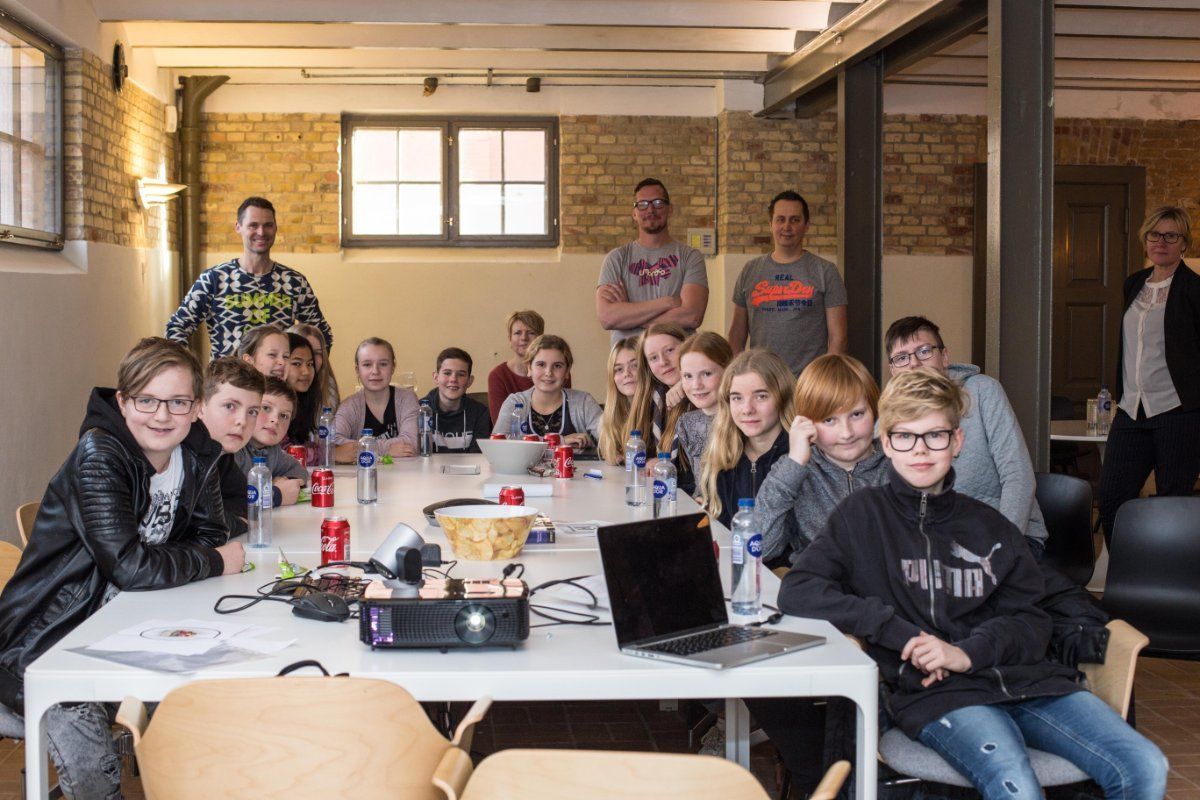 The 17 talented students from a local school in Odense.

An exclusive entry to the mysterious land of code

It’s not part of the usual curriculum at Søhusskolen that the kids get taught coding (unfortunately 😉 ). It was an exclusive opportunity that dropped into the lap of their teacher, Peter Milwertz - an opportunity made possible by the fantastic association “Coding Pirates”. A Danish association that helps develop children's IT skills and creativity.

Peter quickly accepted this opportunity - even though he himself had never played around with code either.

And we, Umbraco HQ, were also fast to accept when we got contacted by Coding Pirates and asked if we’d see the games and give feedback. Me and Claus were assigned this amazing task and we were super excited! 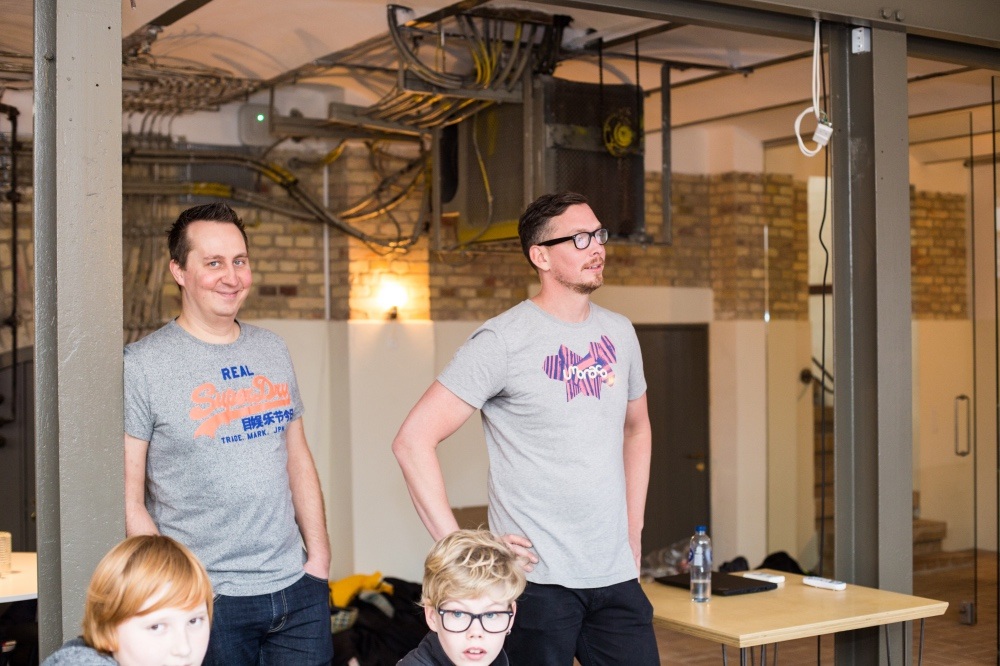 Claus and me (Rune) being very impressed with the games we saw - and played!

What were the children's impressions of it all?

My colleague Vera had the pleasure of talking with two of the talented coders from Søhusskolen, Nadia and Asta. Not only were they talented at coding, this video also shows that at an age of just 12 they both have quite impressive English skills!

Let’s hear what they said:

“It’s like crosswords, or a puzzle - but you decide on the pisces so like; “If” black touches blue “then” the wall disappears” Nadia explains.

What were the teachers’ impressions?

“It has been amazing to experience the development of the children’s skills - starting completely from scratch and then getting so far in just a week. All groups were very self driven and it’s impressive to see their ideas being transformed into digital products without too much interference from any adults.

Coming here at Umbraco today, showcasing their games and getting praise and feedback from professionals and being taken serious - they’re all just glowing with pride! That is so nice to see.” Peter Milwertz, Teacher at Søhusskolen. 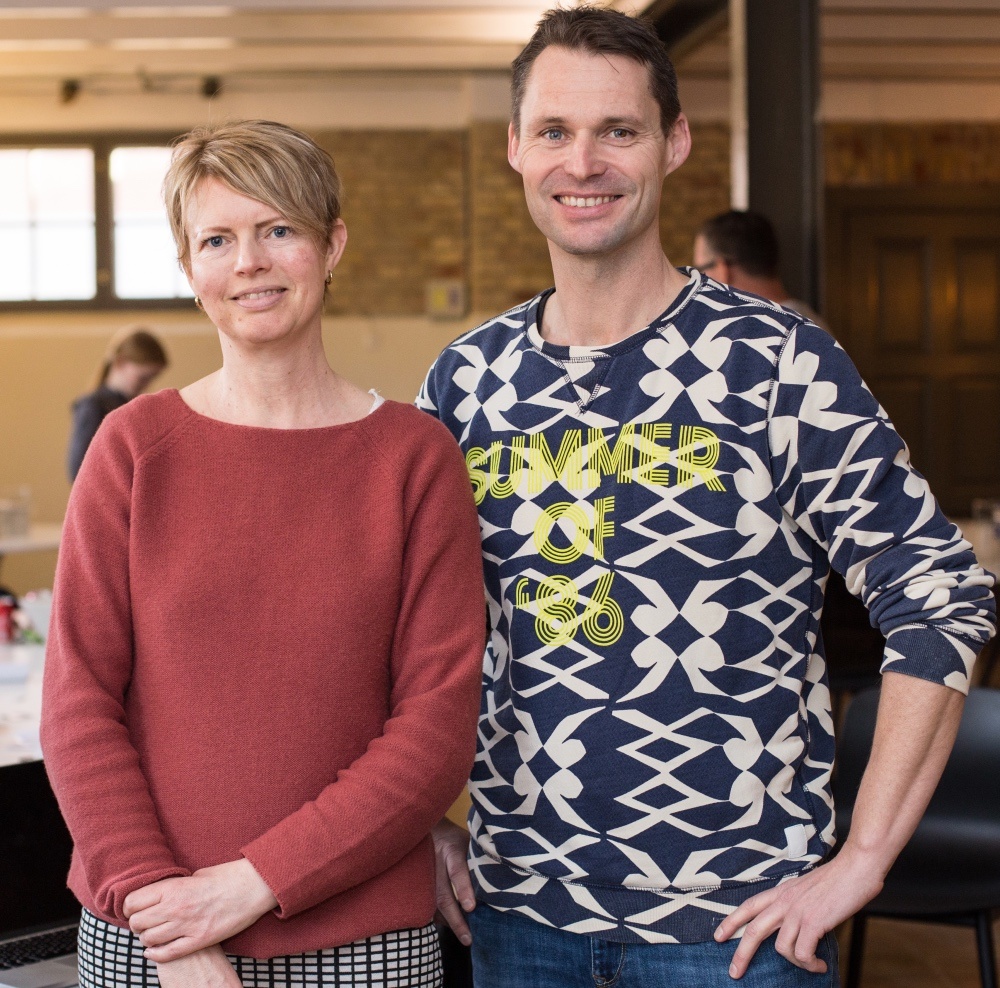 Even the Headmaster of the school participated, and she was quite impressed and also very pleased with Umbraco for arranging this visit:

“Thank you for the collaboration - it has given all of us an extraordinary and vivid insight into the needed collaboration between public schools and the job market. An insight into what future job role may also include...” Pia Thing, Headmaster at Søhusskolen. 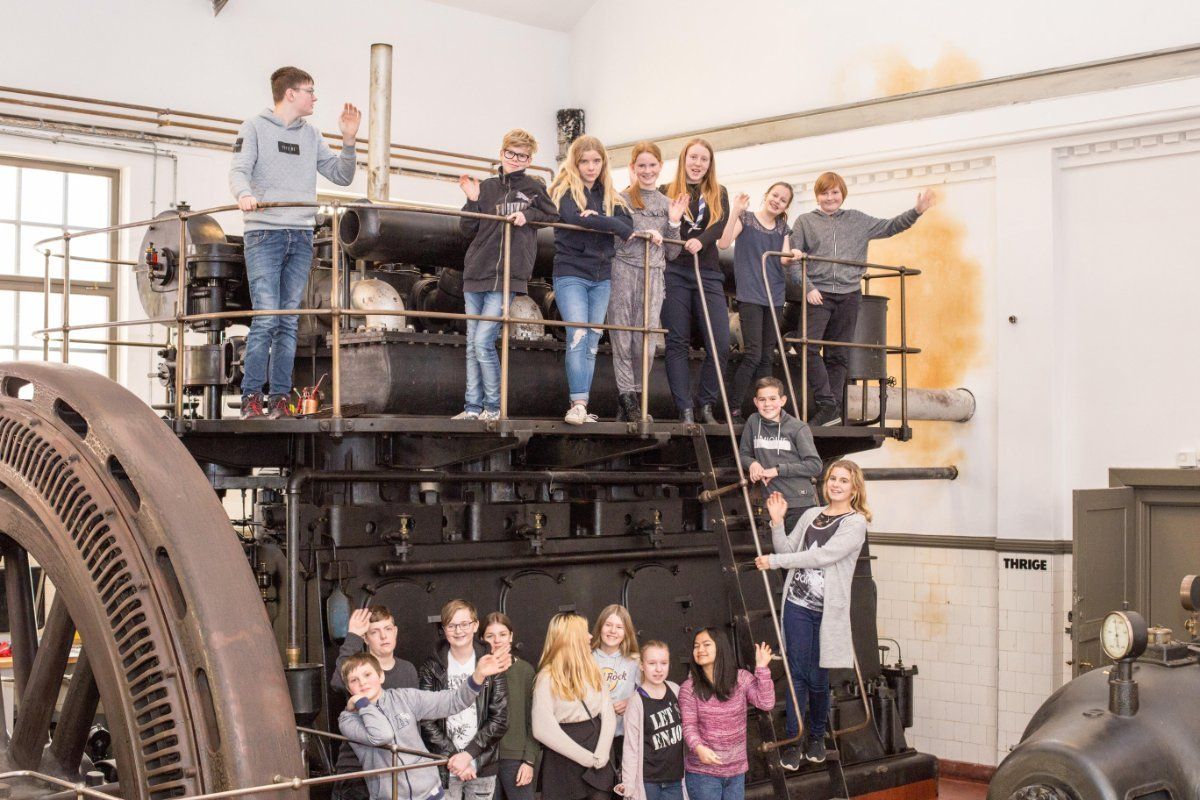 Coding was a big hit for all 17 - and so was the spectacular engine room at Umbraco HQ.

I sure hope so, but only time will tell. But from the enthusiasm and talent that me and Claus experienced that day, it's clear that a week like this has given these 17 children an insight into coding that’s both fun, interesting and now not as mysterious as before. And that’s a huge step!

Thank you Peter, Birthe, Pia and all of 6.A for visiting - it really was a pleasure - and thank you Coding Pirates for making all of this happen in the first place!