Well hello there 2020 🙋‍♂️ We’ve entered a new decade and Umbraco’s 18th year as an open source product. And what a year it’s going to be! So many exciting things in the pipeline for the CMS, Umbraco Cloud, add-ons, community initiatives, festivals and much more. As per usual, I’ll be here to provide you with bi-weekly updates on our products every step of the way. Happy New Year - let’s get going:

The first new minor for Umbraco is already out. We released Umbraco 8.5 on January 14th, containing a core version of Umbraco Modelsbuilder. Having assumed full responsibility for how models are automatically generated makes a lot sense to us but also meant we had to decide what is core functionality and what is nice to have. The outcome is that the core modelsbuilder is lighter on features than before but the full suite of features are still available in the modelsbuilder package.

Unfortunately, there have been a few hiccups that we truly wish we had caught before the release but we’ve been working hard on resolving them both internally and together with the author of modelsbuilder.

We’re happy to see that with 8.5.3, we’ve taken care of the initial hiccups from the 8.5.0 release and want to thank our vigilant community for reporting the issues quickly.

For more details on Umbraco 8.5 and the new built-in Umbraco Modelsbuilder see the release blog post.

Umbraco Cloud sites running 8.5+ have received the patch, for more info on the patch see the 8.5.3 release page.

New minor versions of Umbraco Forms were released on Tuesday the 28th of January. Some highlights include:

And bunch more. You can read all the details on the download page.

The new version of Umbraco Forms will be available through the minor upgrade button on Umbraco Cloud and all new projects will be running the latest version by default.

We started the year out with a new minor release for Umbraco Deploy 8.3. This release contains a number of nice bug fixes and improved Partial Restore feature for Umbraco Cloud making it a breeze to add existing content to new environments. 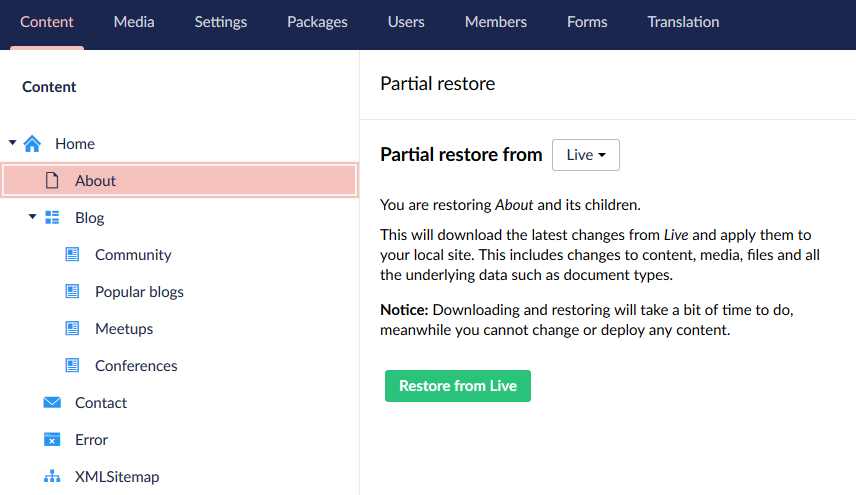 The feature is available on all Umbraco Cloud sites running version 8+ .

You can read more about the feature in this previous product update under the “Updates to the Roadmap” section.

We’re currently testing Umbraco 8.6 in order to get the release candidate ready. We’re aiming to make it available next week. So keep an eye on twitter or the our.umbraco.com release page.

Umbraco 8.6 has many new features to look forward to and we can’t wait to hear what you think of it. Here are just a few of the features that await:

Finally, there’s an answer to the age-old questions: “Where is this image being used?” or “Is this image even used on the site?”. With Media Tracking, you’ll be able to see a complete list of all the places the image is being referenced and what property it’s being used on. This way your editor can feel more reassured whenever they need to update or delete an image as they now have the full overview.

I.e. Instead of getting the default “Required” message when saving a content item, you can now add your own message such as “You need to add a title for the blog post”.

By adding these helpful messages you can enhance the experience and give in-context help when it’s needed. A huge shout out and big high five you rock to Andy Butland for adding this wonderful and very friendly functionality to Umbraco 🙌

On January 2nd we updated the pricing structure on Umbraco Cloud and introduced a new, much requested plan. Based on feedback, we’ve introduced the Standard plan which bridges the gap between the Starter and Professional plan both in terms of pricing, performance and SLA. We’re happy to see that it’s already been well received.

Along with the new plan, we’ve also introduced a Project Create dialogue that makes it easy to compare and choose between the different plans when you create a new Cloud project inside the Umbraco Cloud Portal.

And finally, it’s worth highlighting that you no longer have to pay for team members you add to an Umbraco Cloud project. We want it to be as easy as possible to collaborate on Umbraco Cloud and to predict costs, so no matter if you are a single developer or a large team, you can choose the plan that is suitable for the project. No more sharing the same log-in with 10 different people. And this will also give you a greater overview of who’s done what and when in the portal. Basically, making it more team-friendly without worrying about any additional fees.

You can read more about the updated plan and pricing in this blog post and get a full overview of the plans on the Cloud Pricing page.

We’ve moved a single item on the Product Roadmap, the Block Editor from Next -> Now, and have an update on the .NET Core item.

An update to the Block Editor

We’ve started development on the Block Editor and are mainly focusing on two things; getting the data structure in place, and getting a proof of concept for the UI/UX.

We’re trying something new to get feedback, so next week we’ll do a live demo and feedback session for the participants on the RFC. It’s important for us to get feedback early in the process and we’re excited to try this new format out. I’ll make sure to keep you posted on the progress in future Product Updates.

The item for moving Umbraco to .NET Core is still in the “Later” category but quite a few things have happened here. As I’ve mentioned in previous updates, the first up-for-grabs issues have been resolved by community members. In December, we announced the creation of a community team for the project and a few weeks ago the team members were in place for the Unicore Team. We’re overwhelmed and very, very happy with the amount of interest that has been shown for this project.

The new team is meeting up for the first time this week at Umbraco HQ for a 2 day kick-off. Here the team will be introduced to the project and define the team mission and structure. After this we’ll announce milestones for the project that will be reflected in the Product Roadmap.

That’s it for this update...

If you have product feedback you’re welcome to reach out to us on product@umbraco.com, contribute to the RFCs and if you want to get personal, you can find me on Twitter (@hemraker).

The final Product Update of 2019. Rune will give you an update on new releases, upcoming releases and new features in Umbraco Cloud.